What is a Unitary Patent?

The Unitary Patent is a new option for protection in the EU, in addition to national patents and conventional European grouped patents. Unitary protection means uniform coverage in up to 24 EU Member States* through a single patent with unitary effect, a single renewal fee equivalent to 4 countries to be paid to the EPO, no validation costs, only one translation to be filed and no fee to be paid for the unitary protection application.

Unitary patents are derivable from European patent applications that reach the grant stage. Applicants will have to decide whether to file a unitary protection application, and the advantages and disadvantages will have to be weighed carefully. 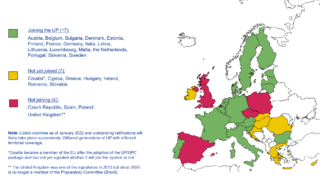 What is the Unified Patent Court?

The new court will have exclusive jurisdiction over unitary patents and conventional European patents, including those granted before the entry into force of the new court.

However, during a transitional period of 7 years, renewable once, it will be possible to exclude the jurisdiction of the Unified Patent Court for European patents and European patent applications. In order to do so, formal requests for “exclusion” will have to be introduced in the “Opt-out” register, which will be open from 3 months before the entry into force of the Unified Patent Court. For each European patent, the “opt-out” decisions must weigh the risks and benefits of the Unitary Patent Jurisdiction, including the uniformity of revocation against the uniformity of enforcement decisions across the territories of the signatory member states.

How we can help you and add value?

The GEVERS 360° IP Strategy teams can advise you in each case and file the Request for
Unitary Protection on your behalf. More broadly, we can help you review your patent protection strategies in Europe, considering Bundle European Patents, Unitary Protection, but also national filings, for your entire portfolio or on product or category basis.

At GEVERS we can actively assist you in making informed and impactful Opt-out decisions, thanks to our expertise in patent law, enforcement, financial and business knowledge.
We can take care of filing Opt-out applications on your behalf. We recommend a comprehensive analysis of your European patents/applications portfolio to facilitate and regroup decisions, taking a step further, we can advise you on your overall enforcement needs in Europe, depending on your commercial strategy and competitive environment.

Where we make the difference?

The initial coexistence of the UPC and national jurisdictions will offer new defensive options versus European Patents owned by third parties.
Our 360 ° IP Strategy teams will help you identify strategic moves aimed at limiting forum choices for potential ligation adversaries.

The new legislative environment will have significant implications on contracts such as co-ownership, collaboration and license agreements.
At GEVERS we stand ready to assist you in negotiating, drafting and revising such agreements to anticipate and manage UP and UPC-related decisions between you and your business partners.

We look forward to working with YOU

Everything you need to know about the Unitary Patent.

Supporting Start-ups/SMEs from the start

Optimisation of income and royalties

What is a trade secret?

GEVERS China Desk is the bridge between China and Europe.

GEVERS is your reliable, trustworthy and efficient partner in Europe.

How to protect and manage my intellectual property rights?