Cannabis: Trademark Protection in the EU. Don’t ‘shock’ the public! 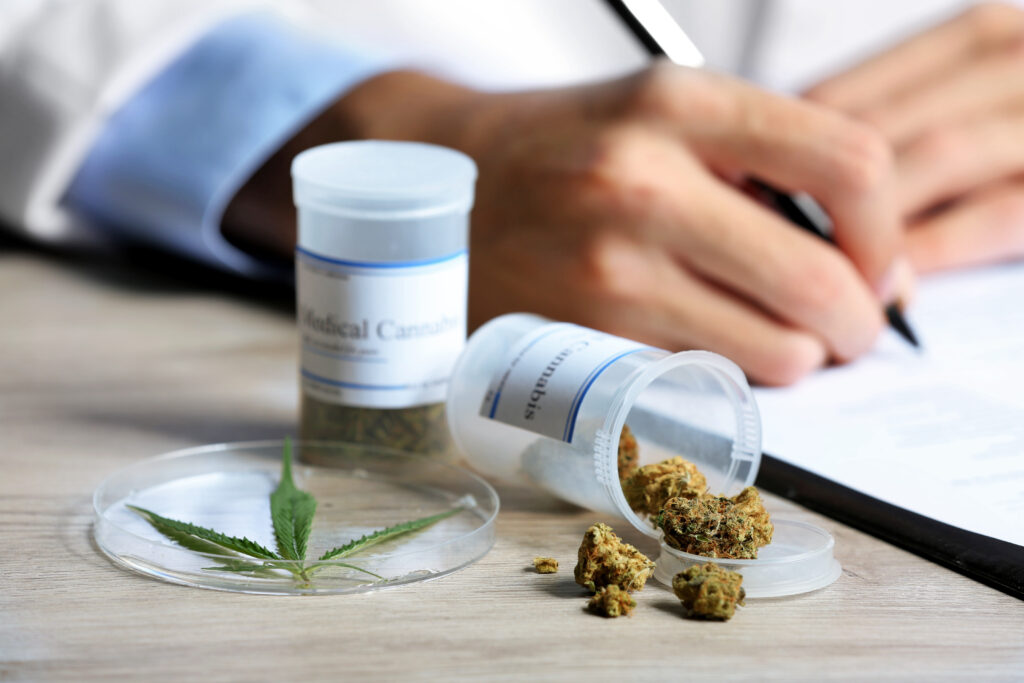 The legalization of cannabis products has been stirring the public debate for decades. With several US states adopting a more liberal approach to the green goods, especially for medical / therapeutic use, ganjapreneurs are ready to take their share of the (legal) market for cannabis and its derivatives, from oils to edibles. The same is happening on the other side of the ocean in several European Union member states.

As a business, it goes without saying that you want to protect your interests through all IP rights available, including the signs to distinguish your offerings from those of other businesses. But will your trademark application be accepted? Not if it is too ‘weedy’! Find out more below.

First things first, there is no EU-wide legislation specifically concerning the registrability of trademarks where the sign includes references to cannabis or where the goods and services specifically cover cannabis and derivative products or their production.

Instead, the European Union Intellectual Property Office (EUIPO) applies the same criteria for each trademark application, including those where the sign references cannabis or where the goods and services include cannabis or cannabis-derived products. The EUIPO will examine each EU trademark application with regard to formalities, classification and absolute grounds of refusal. The absolute grounds for refusal are dictated by the EU Trade Mark Regulation (hereafter: EUTMR) and their application has been further clarified by the Court of Justice of the European Union throughout the years. For clarity, the mere fact that certain goods can be included in the classification of an EU trademark application which are legal in one member state and illegal in another (e.g. products containing medicinal cannabis) does not, by itself, change the relevant public’s perception of a sign.

Since an EU trademark grants exclusive rights on a sign in relation to specific goods and services throughout the EU, it should therefore be acceptable as a trademark for the whole territory of the EU. As a consequence it is sufficient that a ground for refusal exists for only one part of the relevant consumers in the EU. For example, if a sign is descriptive only for Italian speakers, it will still be refused as an EU trademark on absolute grounds.

Furthermore, the sign must have distinctive character, and it cannot be descriptive for the goods and services it is applied for. In practice, several trademark applications for signs referencing weed lack distinctive character (the so called B ground for refusal) and/or are descriptive (the C ground for refusal). Like any trademark, these should enable the relevant consumer to distinguish the  goods and services from one particular undertaking from those of others. A trademark simply mentioning a variety of weed, even if the name is primarily used in slang by recreational users, will not be seen as an indication of commercial origin.

The EUIPO thus weeds out (pun intended) quite a number of trademark applications on the B and C grounds.

The Board of Appeal has, for example, confirmed that the figurative sign ‘JUST CBD’ (see picture hereunder) is to be partially refused for goods that can contain CBD, such as cosmetics (class 3), edible oils and fats (class 29), pastries and confectionery (class 30), plants (class 31) and liquid for e-cigarettes (class 34):

The sign was refused for lack of distinctive character, as consumers would easily understand it as emphasizing that the products contain cannabidiol.

But the B and C ground are not the only absolute grounds of refusal that might come into play.

As it seems, the biggest hurdle towards trademark protection for signs in the weed environment is the infamous F ground, which allows the Office to refuse trademark applications because they are contrary to public policy or to accepted principles of morality.

But what is exactly contrary to public policy or principles of morality? As you would expect, both the EUIPO, its Boards of Appeal, and the Court of Justice have encountered difficulties in striking the right balance.

Furthermore, the principles of morality are not necessarily the same in each member state: something might be unacceptable for consumers in one member state while it is not a problem at all for consumers in a different member state due to linguistic, historic, social and cultural reasons. Yet, as we stated before, an EU trademark application will be refused also if the absolute ground for refusal grounds is only applicable for one part of the EU.

Some higher case law seems to set out the principles. In 2019, the CJEU ruled that that the Board of Appeal was correct in refusing the figurative sign “CANNABIS STORE AMSTERDAM” (see picture on the right) for inter alia bakery goods, drinks and other goods and services aimed at the general public on the F ground as it was deemed contrary to accepted principles of morality.

The fact that that sign will be perceived as an indication that the food and drink items included in the application, and the related services, contain narcotic substances which are illegal in many Member States because of fundamental interests in those states – namely public health – led the Court to conclude that it should be refused on the F ground. Even though the debate on the topic is evolving, as the Court admits, it ruled that there is so far ‘no predominant trend in the European Union regarding the lawfulness of the use or consumption of products derived from cannabis whose THC content exceeds 0.2%.’ (judgment of the General Court of the European Union, 12/12/2019, T-683/18, ‘CANNABIS STORE AMSTERDAM’, § 51). The Court ruled that these facts have a decisive influence on the perception by the relevant public.

It is, of course, not possible to extract a readymade manual for weed trademarks from this judgment and, as such, the observations were made to assess the legality of the Board of Appeal’s refusal of the specific sign displayed above.

Yet still, one would expect EU trademark applications for signs including directly and / or explicitly ‘pot’, ‘grass’ ‘herb’ ‘dope’, ‘weed’ and ‘CANNABIS’, especially as dominant element, to be refused.

However, the EUIPO seems to struggle in drawing the line in its daily examination practice. For example, the following signs were refused: 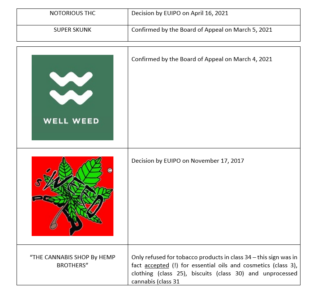 Meanwhile, the following signs were accepted for several goods and services: 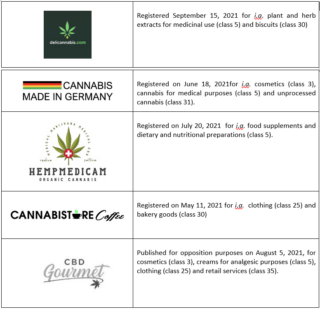 The F ground is known to cause “food for thought” and is notoriously hard to assess. While the Court has adopted a rather conservative stance, it seems that the EUIPO does, in fact, take a more liberal approach towards ‘cannabis’ trademarks. Thus, in practice, it is not at all impossible to obtain an EU trademark even if the sign contains references to cannabis, including drawings of leaves, but unfortunately, it is also not straightforward to predict the outcome of such an application. Ultimately, the EUIPO will assess each application on its own merits. In case of a refusal, it is up to the applicant to prove that the grounds for refusal are in fact not applicable.

GEVERS is always ready to help you. Do not hesitate to contact us at trademarks@gevers.eu to schedule a meeting.

To learn more about Cannabis, please watch for our next quarterly newsletter, to be released January 2022, that will expand on this interesting subject matter on an IP level.

Cannabis – avoiding confusion with other cannabis trademarks: introduction on likelihood of confusion